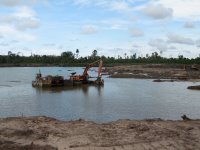 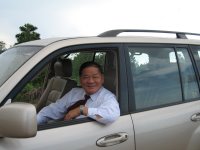 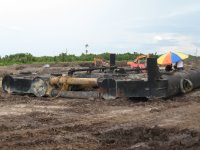 I met the founder and Managing Director of Miri Housing Developement Realty Sdn.Bhd on my trip there April/May 2006.

Dato Lau Siu Wai born in Teochew District in 1931. He then went to Hong Kong at the age of 15, working in the day time and studied at night time, eventually he put himself through high school. He had been involved triad life in his days in HK, been a fortune teller, but fate had it to bring him to Miri to work for Shell in 1953.

In Miri he worked in various posts in Shell and later founded and became the Principal of Miri Secondary School. In the 60's Sarawak was under British rule. Only 30% of the students were able to gain admission from primary to secondary school. So, he persuaded 10 investors to start a seconday school for the benefit of the poor.

He related to me his past struggles and setbacks, how he had been down in life 3 times, how he overcame them.

On reading his book he recorded how he had faced many business failures but picked himself up, and courageouly moved on.

He is the developer of Piasau Garden, Hilltop Garden, Bintang Jaya Commercial Center, Bintang Plaza Shopping Center and now is building a 2,000 acres mixed development called Desa Senadin. He is also about to build ICONMALL in Kuching that has over a million sq.ft of retail space making it the biggest mall in Sarawak.

He was the man who brought Curtin University to Miri to enable those who could not afford to study aborad to do so locally in Miri. He truly is an inspiration.